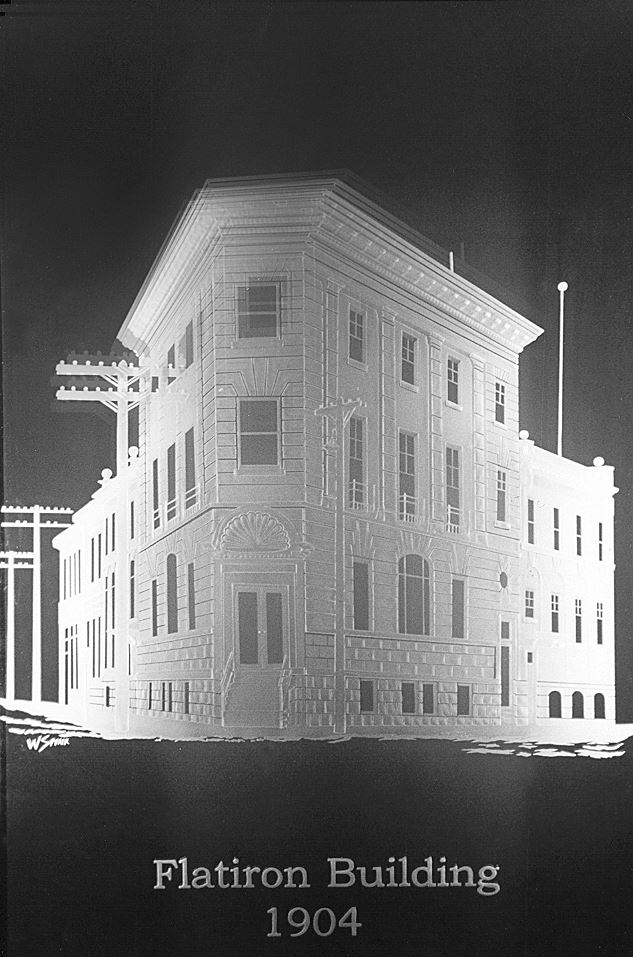 Lacombe City Hall has many pieces from the public art collection on display.  The foyer windows are masterpieces of art glass done by local artist Wayne Spink, who sandblasted historical images into the panes of glass between the foyer and stairwell.  There is a third piece to the left of the main counter as well.

The upper halls in City Hall have works of art that are changed several times each year.   If you are visiting to pay a bill, receive a permit, or for a meeting, be sure to take the time to see what’s on display. 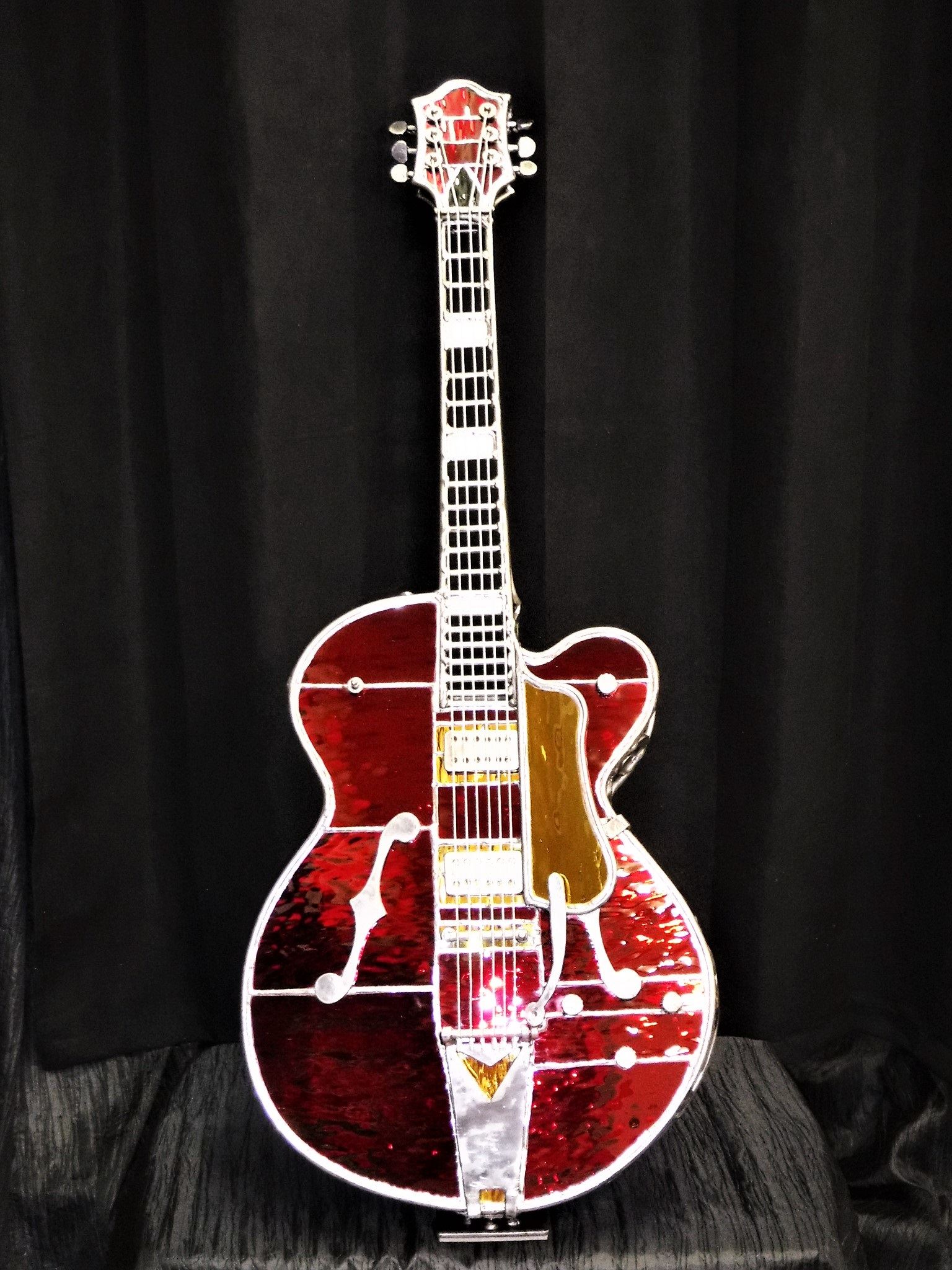 The Lacombe Memorial Centre is where you will find the most extensive collection of artwork owned by the City of Lacombe.  On the main floor, you will see paintings and drawings by various artists, a fabulous selection of ceramic shoes and sandals by ceramicist Phemie Mcleod, pottery, and woodworking.  The hallway leading to Anna Maria’s Café often features various art exhibitions throughout the year, and artwork created by members of the Lacombe Art Guild.

While you are in the main foyer, don’t forget to look above the doors to Centennial Hall, where you will see an incredible painting of snow geese by artist Geoff Phillips.  Commissioned for the Lacombe Memorial Centre in 2009, this large and somewhat whimsical piece is a show stopper!  Once you’ve taken it in,  turn around, and above the north entrance to the building, you’ll find an incredible glass mosaic created by Voyageur Art & Tile of Red Deer.   “Elevators Ascending” is a large tiled image depicting the disappearance of grain elevators from our area.  If you look closely, you’ll see Lacombe – a small red piece of mosaic glass in the lower left hand of the mosaic.

In the upstairs foyer, you will find more three-dimensional artworks, bronze sculptures, and paintings.  Of particular note is a life-size steel and stained glass Gretsch Guitar created by Red Deer artist Trenton Leach of Rogue Art & Design.  You’ll also notice the tall maple and woven wool lamp between the two leather couches, which was created by Kathryn Miller, a former Lacombian now living in the Vancouver area.

Lacombe’s downtown back alleys come alive for you with murals depicting Lacombe at the turn of the century and beyond!

Starting at the north end of Kavaccino’s Café on 5028 51 Street, you’ll find one of the first privately commissioned historically-themed murals in Lacombe featuring a cook at work in an old kitchen and the farmyard.   Walking southward, on the south and west walls of Sims Insurance, is a new mural of fall harvest created by local muralist John Ellenberger. 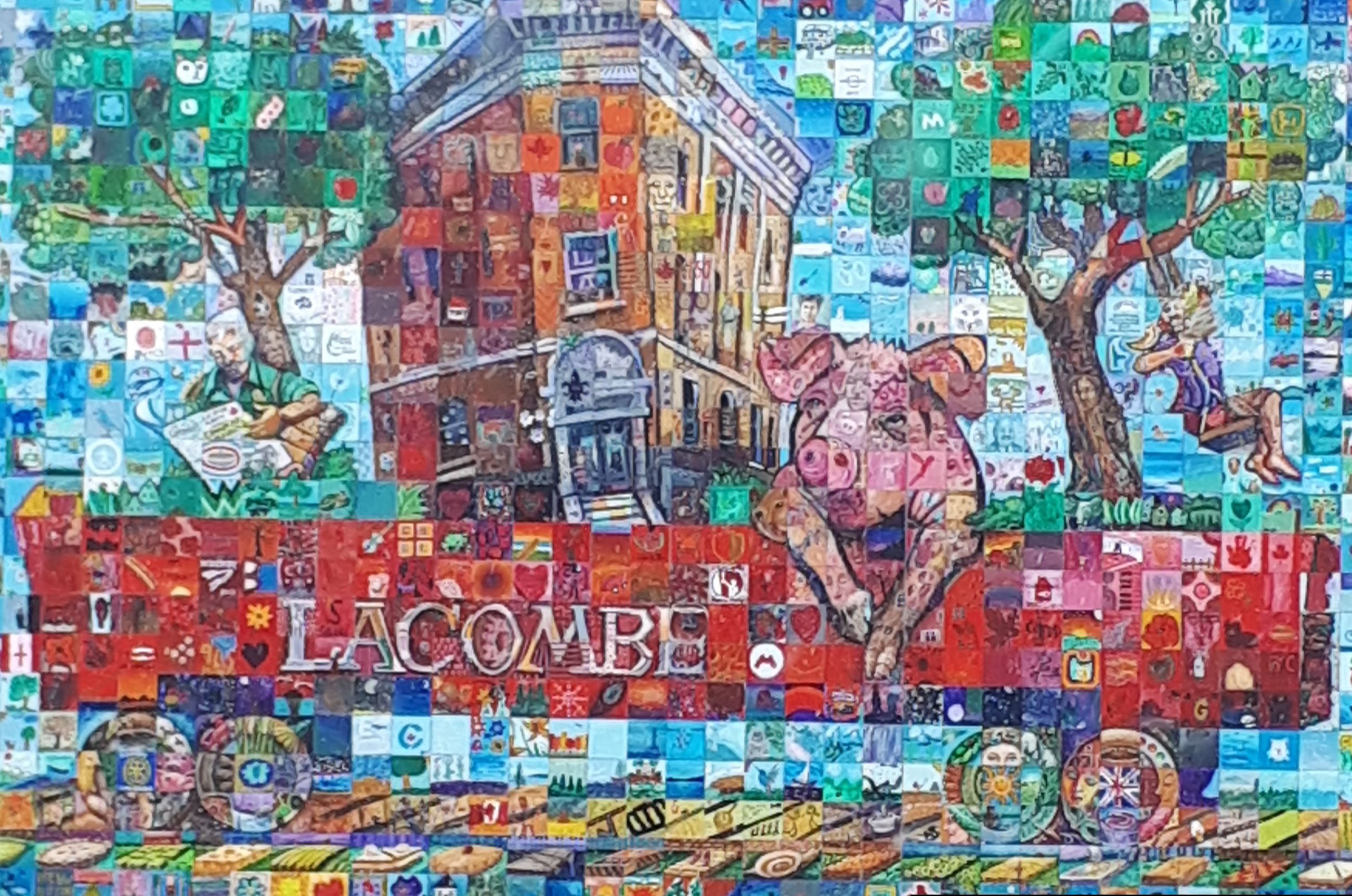 Continuing southward, the east wall of the grey brick Provincial Building, you’ll find Lacombe’s Mural Mosaic, which was created as part of the Canada 150 Mural Mosaic project. Designed in 2018 with the guidance of the Mural Mosaic Team from St. Albert, it features over 500 individual tiles adorned by residents and artists, that when put together create larger images of our history and some of the features of our community that were important to our residents at the time.  For example, the Lacombe Pig was a special breed of swine developed at the Lacombe Research Station that, unfortunately, is now on the endangered farm species list. 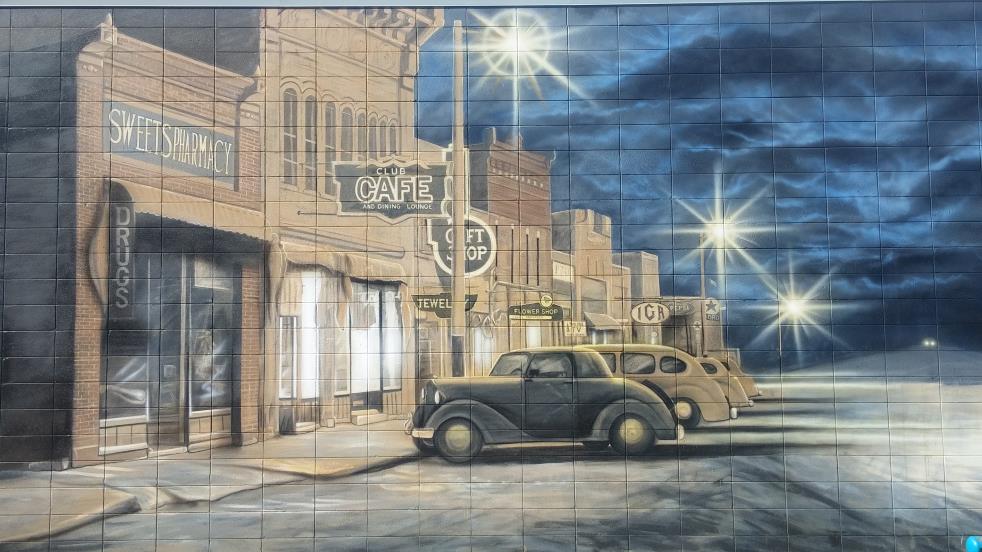 From the mural mosaic east across the street, you will be at the beginning of Phase One of the murals behind the Royal Bank created by Tim Giles.  Here you will find many alley walls painted with imagery from Lacombe’s early years.  To the south and across the main street, you will find many more murals created during Phase Two in the alleys behind the Bank of Montreal, including a stunning night scene in the 48th street alley behind Leto’s Restaurant & Lounge that was painted by local artist John Ellenberger.

At this time, you may want to get into your vehicle and drive north on 50th street to the four-way stop. Turn east on 51 St., and immediately south into the first alley. Here, John Ellenberger’s artistry features Clydesdale horses being prepared for work in the fields at the Lacombe Research Station during the 1930s. Next drive north to 5138 49st where you’ll find a war-time tribute mural on the east wall of the Lacombe Legion Branch #79. 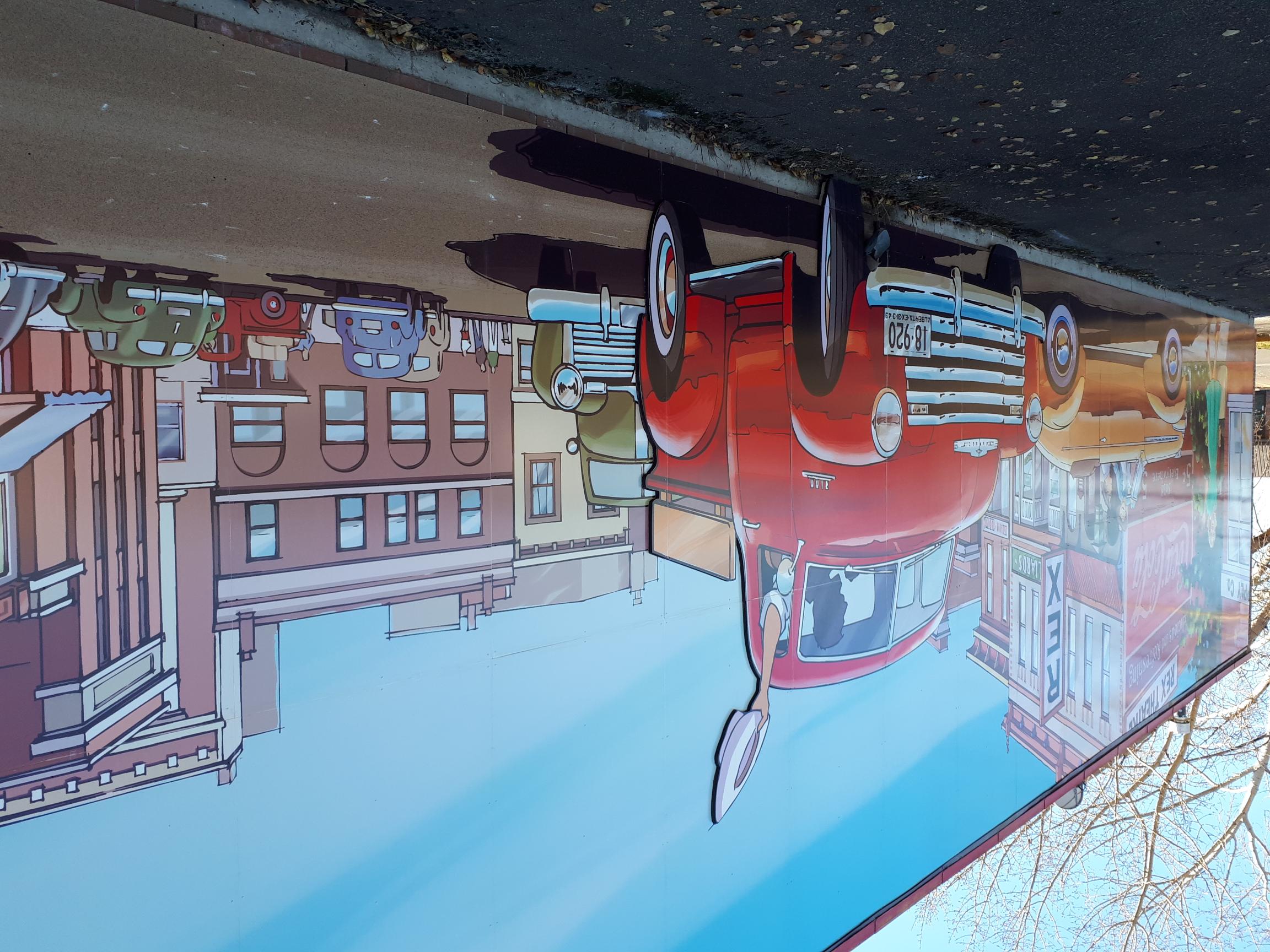 Driving just a bit further east and north to 54th avenue and 45th street, you will find our first digital mural created by British Columbia artist Larry Hunter.  “Hey, Doreen” showcases post-war era Nanton Street (50th street) and features a unique “bump-out” of an old red truck.  You can view this fascinating piece on the north wall east of the Dollarama building.

Travel west from “Hey, Doreen” on 54th avenue, and you’ll soon see John Ellenberg’s delightful mural of stuffed animals painted on the north side of the splash park at the Gary Moe Auto Group Sportsplex. Inside, you’ll find a large mural of the many activities that have taken place at the sportsplex, along with other great art pieces created by Larry Hunter and Cornel Hanson.

Now it’s time to backtrack and cross the train tracks at Wolfcreek Drive and Highway 2A, to Blindman Brewing located at 3413 53 Ave.  Here, Lacombe’s newest contemporary mural has been created by Edmonton based artists AJA Louden and Clay Lowe.  While you’re there, be sure to pop by the Police Services building and have a chat with the handsome bronze police officer seated at the front of the building!

In Lacombe’s beautiful downtown core, you will find the first of several outdoor sculptures.

The Kinetic Tree which is located at the corner of highways 2A and 12, was created by Edmonton based sculptor William Johnson to honor Lacombe’s beautiful trees and green spaces. Look closely and you can find birds floating in the breeze between the branches.

North of the Kinetic Tree on 49th Street, is a beautiful sculpture located outside the historic Blacksmith Shop Museum. While not an official piece of the public art collection, this hand-forged metal horse created by area blacksmiths is definitely worth seeing!

If you would like to continue your walk, or perhaps use a vehicle, you can head north on 49th Street to 54th Avenue where you will find Popow’s Park. Near the playground, is an imaginative fantasy wood sculpture of a Wizard and the recent addition of a dragon seated at the top of a stack of books as she reads to a tiny mouse in her hand.  Chainsaw artist Darren Jones of Ponoka, Alberta, created both pieces for our community to enjoy.

A couple blocks west, is the Gary Moe Auto Group Sportsplex (5210 - 54 Avenue). Here you will find numerous pieces created by Larry Hunter of Oliver, BC. Larry’s works include

Also at the Gary Moe Auto Group Sportsplex, you will see John Ellenberger’s mural of stuffed animals painted on the north wall of the splash park.

From the Sportsplex, head west to 58th Street and 52 Avenue to Mayor’s Park, where you will find three huge metal pine cones created by Ontario Artist Floyd Elzinga. The patina on these pine cones makes them seem so real!

The last sculpture in Lacombe can be found on the east side at the Police Services Building, located at 5301 Wolf Creek Drive. Artist Nathan Scott has created a full-size bronze sculpture of a police officer to welcome you to the facility. 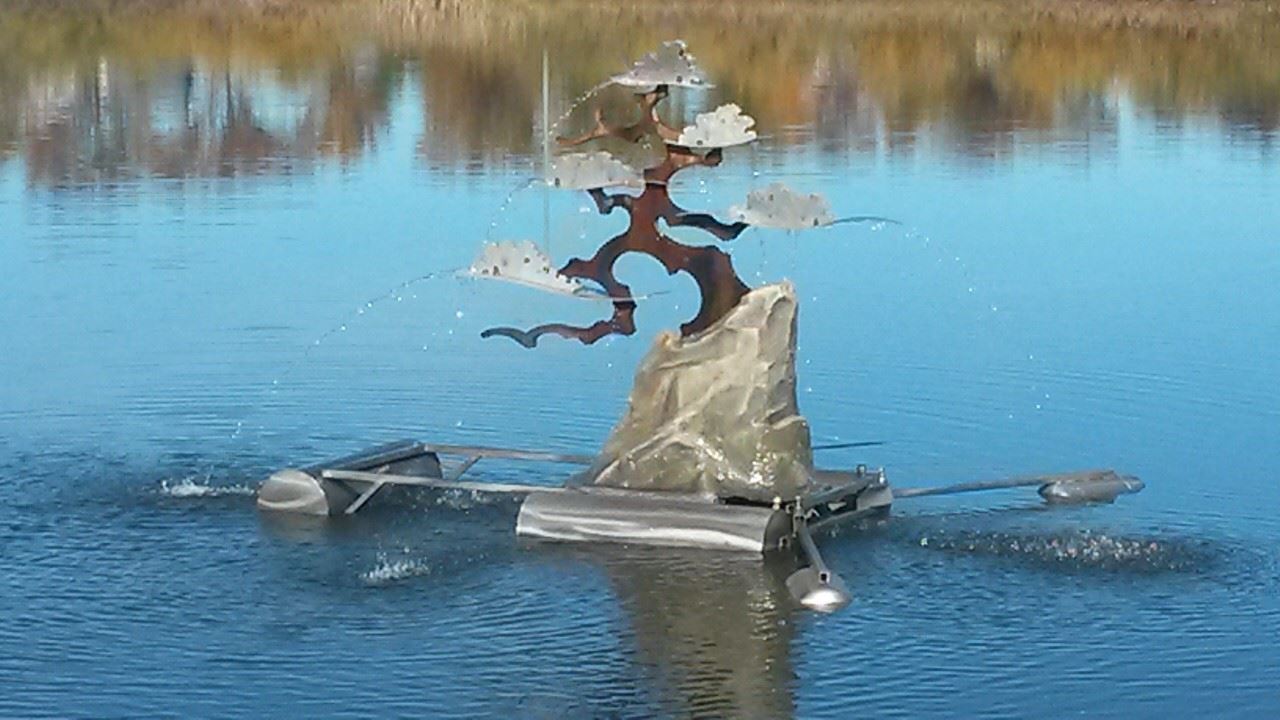 During the summer months, you can see a unique sculptural fountain in Bruns Pond, located at Woodland Drive and Heritage Way. The Bonsai Fountain was created by Larry Hunter to honor our sister city of Rikubetsu Japan, and you can view it at the south end near the walking bridge.

We encourage you to spend some time taking in Lacombe’s public art collection and we hope you will return time and again to see what’s new.